Posted by Tofan Archives at Thursday, July 24, 2008 No comments: 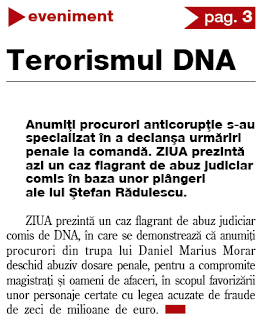 Businessman Gheorghe Tofan, who manages Tofan Grup and Danubiana, one of the leading tyre producers in Romania, says he is trying to attract an American investment fund as a shareholder, after the company's administration process is completed.
The Tofan Grup, one of the largest holdings of the last decade, which, apart from the tyre producer Danubiana, also includes Tofan Trans and Rotras, was placed under administration over a year ago after it cumulated debt worth over 17 million euros.
"We are still under administration, a process which should have ended in December last year. I hope I will be able to finish restructuring the business in the first quarter of this year, and that we can start investments, private funds meant to help develop Danubiana," said Gelu Tofan.
The businessman added the plan was to attract an American investment fund as a shareholder after the completion of the restructuring process, and was working on it with consultants PriceWaterhouseCoopers.
Danubiana is the only producer of bias tyres in the region, with Belarus and Turkey being the other countries where such tyres are produced in Europe. After it sold the Silvania plant in Zalau to Michelin in 2001, Tofan gave up car tyre production to focus exclusively on tyre production for off-road vehicles, trucks, buses, tractors and farming vehicles.
"I have three solutions for the company. One is to move production to China or Belarus," said Tofan.
He added that currently, production of radial tyres was no longer profitable in Romania due to the increased price of utilities, which results in excessively high costs per kilo of tyre produced.
According to Tofan, another solution is to keep production in Romania and make the business profitable by attracting investments. He does not rule out another solution, an alliance with a similar producer in Turkey, in order to set up a regional holding.
Although Tofan predicted the rebound of commercial and manufacturing operations last year, the group's results fell below expectations. In 2006, according to the Ministry of Finance, Danubiana posted business worth 2.3 million euros and losses worth 6.8 million euros.