Social Change in Russia and Eastern Europe: From Party Hacks to Nouveaux Riches - By Silviu Brucan 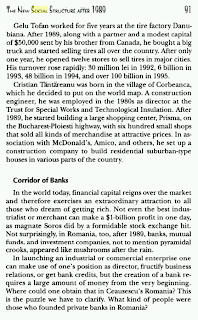 "Gelu Tofan worked for five years at the tire factory Danubiana. After 1989, along with a partner and a modest capital of $50,000 sent by his brother from Canada, he bought a big truck and started selling tires all over the country. After only one year, he opened twelve stores to sell tires in major cities. His turnover rose rapidly: 30 million lei in 1992, 6 billion in 1993, 48 billion in 1994, and over 100 billion in 1995."

Posted by Tofan Archives at Wednesday, September 30, 1998 No comments:

Referring to the progresses registered this year, Gelu Tofan says that, besides the licences from the Romanian Car Office, the Dynamic Fitness Test Institute with the British Ministry of Defence and the European Economic Community Operative Body, the Tofan Grup plants have received a licence according to the regulations by the National Defence Ministry of Romania and SR.EN ISO 9001. These certificates are much more important as the tyres made at Victoria SA plant are dedicated to the military transport means' outfitting, Tofan adds.

Tofan Grup has got licence for its entire range of tyres. The company's exports, meaning 60% of the yield by Danubiana /Bucharest/ are certified by British Standard Institute and head the USA, Finland, Sweden, Great Britain and Germany.

Another aspect Tofan dealt with in the interview is referring to the "unfair competition of second-hand tyres importers". In order to make suitable to these "unfavourable circumstances", Tofan Grup has last year adopted a range of restructuring measures. Some technological lines have changed and the tyres standard design diversified.

Tofan Recap for retreading tyres plant and its distribution system also belong to the Tofan Grup. The said plant has built, in cooperation with Automaxima, a system of its own including 40 county branches and a network of shops.
Posted by Tofan Archives at Wednesday, September 23, 1998 No comments: