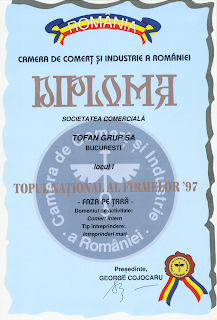 The Young Wolves of the Private Sector (World INvestment NEws)

Despite all difficulties, high inflation, expensive credits, and old-fashioned mentalities, Romania has got a young and dynamic private sector. Most of these company-builders are rather young people who had the rare opportunity during the communist regime to take advantage of some Western exposure. Quite a number of them managed to build in just a few years vibrant companies, some of them pretty diversified, with sophisticated management and able to face competition not only from local state-owned companies (usually worse equipped to operate in a market economy), but also from powerful foreign companies. George Copos and his Ana Group (a $150 million company last year) is a good example of bold diversification. Copos started in early ‘90s as an importer of home audio/video electronics; as the exclusive distributor of Samsung electronics, Ana Electronic became quickly a leader on this market. Later on the company expanded vertically in the business, turning from a simple distributor to a manufacturer, assembling locally color TV sets and home appliances, few years later entering in the food processing industry. The GSM business was next, followed by the tourism industry, Ana Group acquiring a hotel in Bucharest and three in Romania’s most fashionable mountain and winter sports resort, Poiana Brasov.

This is not to say that success is necessarily related to diversification. The now-34 Cristian Burci was pioneering in early ‘90s the newly-born Romanian advertising industry. He set up country’s first advertising agency, that has later associated with Grafitti BBDO. Then the restless Burci started two media buying companies for international ad agencies -- "They now rank second and third in Romania, but if put together would rank first by far" – and a billboard company. A modest and rather low profile man, Cristian Burci came into the limelight when he decided to join forces with a group of American investors and to challenge the supremacy of PRO TV (the TV station of another Romanian media mogul, Adrian Sarbu) on the local TV market. That is how Prima TV was born in December 1997. "We look forward to win a 30 percent market share by the end of this year and to make somewhere between $12-16 million advertising sales. I believe it is going to be a $80 million TV advertising market this year, but it will be booming over the next 3 to 5 years. In Romania you have some $4/capita TV advertising spending, while in Hungary or Czech Republic is $20-22/capita. We want to appeal to a younger family base, people who have aspirations and look towards the future, something like CBS is doing in the States," says Burci.

There were not only Romanians who quickly understood that the booming Romanian media and advertising market could be very rewarding for those who move fast. It was early 1995 and William "Bill" Avery, a native of Seattle (and at the time project manager with the USAID office in Romania), felt that the country had an unfairly negative press in global media – if it had at all – and decided that he should do something about that. It began like a high school operation, with an electronic publication on the Internet, Romanian Press Review . Later during the year it developed to be less and less a simple press review, but began to feature genuine stories, as Avery managed to attract professional journalists in the game. By November 1995 Bill Avery had joined forces with Rachad Al Jisr, an Italian citizen, and both unveiled Romania’s first monthly English language magazine, In Review Romania. "I must agree that it was not an instant success, as we were kind of unexperienced. But we learned as we grew, and last year, in 1997, we were quite successful," says Avery. Successful enough to launch by the very beginning of 1998 a weekly newspaper, The Business Review Bucharest. At this point, the company – Business Media Group – runs in parallel both the Internet wire service, and the two printed publications. However, the competition – not very intense few years ago – becomes tougher every day. "We don’t have a problem with competition – as long as it is fair. Competition is good for us and for our readership," adds the 35 years old Avery.

Daniel Marin was about the same age when, in 1992, he and his partner – two high profile engineers with a Bucharest-based research institute for precision mechanics – decided that it was the time to move. As experts in fluid dynamics, the choice of the profile of the future business wasn’t very difficult: "We thought that fluid measurements will definitely be a very interesting market. Since before 1989 the prices of water, steam, and power had no connection with the reality, nothing was measured, not even the technological fluids," explains Marin the rationale behind his selection. From 2 employees in 1992, General Fluid grew fast to 25 two years later and to 115 to date, on a 1997 turnover of $3 million. Daniel Marin is aware, but not really worried: "One of the keys of our success was that if somebody would try to enter this business, would have to invest a lot in its people. This is a high-tech business, and you can hardly assemble a team of skilled people. In other words, the entry barriers are very high." The market is huge – "Only in Bucharest there are 12,000 blocks of flats, 95 percent heated through a state-owned network. Each block would need at least four meters. During the last two years we were deply involved in this multi-million project and we only installed 5,000 measurement points – which means another 25,000 are necessary, and this only in Bucharest." Although there is a lot of demand for General Fluid’s products and services, Daniel Marin is skeptical about explosive growth: "I am in a strange position and I’m a little bit afraid of making an aggressive marketing, because we may not be able to meet demand. We have to be very careful about this issue – not meeting the whole demand creates the risk of loosing customers’ confidence."

Yet probably the most spectacular Romanian business story was written by Mr. Gheorghe "Gelu" Tofan . A man in his late 30s, Tofan has silently built over the years an empire in the tires business. A former employee of Romania’s largest tire manufacturer, Danubiana, Gelu Tofan started his personal business crusade with a tiny operation, distributing and servicing Danubiana-made tires. As the cash flow improved, he eventually set up an extremely successful tires re-treading company, opearting American Bandag technology. By the end of 1995 Gelu Tofan was the new owner of his former employer, Danubiana, which he has bought from the State Ownership Fund. Less than two years later Tofan Group was taking over another two Romanian tire factories, Silvania and Victoria. "Tofan Group produces now about 95 percent of the total output of the tire industry in Romania. We closed the year 1997 with some $250 million turnover, which puts us on the 23-rd position in the ranking of world’s largest tire producers. We employ some 10,000," says Gelu Tofan. As digesting the new acquisitions takes time, Tofan Group launched a comprehensive investment program to technologically upgrade its facilities, aiming to produce top quality tires. "When we took it over, Silvania was heavily indebted. We managed to cut the losses and right now the company undergoes a vast modernization and restructuring process. It will produce truck radial tires, pumps and other components for tires. We already have large export orders for this factory’s products, but we will only start exporting after the modernization process is over, next year," explains Tofan. Otherwise a nice, charming person, Gelu Tofan is serious about his business: "When we will be done with this modernization process, we’ll be in the top twenty tire producers. We are competitive enough to sell on the American market right now – we sold tires for agricultural vehicles and heavy lorries worth $10 million and we have orders for $20 million this year – and we will be even more so since next year." But the prying mind of Gelu Tofan wouldn’t stop here. The man is ready to seize whatever business opportunity would show up. And business opportunities do show up in Romania: "We have already signed a partnership with an American company for satellite communication technology. We will be the first Romanian company that will operate a satellite system; we will sell these services to others, too. It’s going to bring a lot of money," adds Tofan. By mid-1997 Tofan Group scored the biggest ever victory achieved until then by a private Romanian company, when it made a financial arrangement with Nomura International, under whose provisions Nomura got a 49 percent stake in the group for $40 million in cash and $60 million long-term debt financing. Gelu Tofan is likely the best representative of the new, emerging class of Romanian business people: "We built up a very young team of professionals in our company. This generation is coming to power. When people like ministers Daniel Daianu or Valentin Ionescu, young, open-minded people, with a different mentality, reach top positions within the government or business, this means that we have a future, there still is a chance for us. The main difference between us, the young generation, and the older ones is that if we need a glass of water and we don’t have it, we will make it, create it, not just sit and wait for somebody to give it to us," concludes Tofan.

© World INvestment NEws, 1998.
This is the electronic edition of the special country report on Romania published in FORBES Magazine's enriched with complementary information, such as full interviews, detailed company files and more.
June 1 st 1998 issue
Posted by Tofan Archives at Monday, June 01, 1998 No comments: